skip to main | skip to sidebar

"Has your belly button popped out? Ah, the pregnant belly button: the knot of an overblown balloon, its puckered mouth holding back too much air, the cheeks stretched thin with the effort." ~Great with Child
Posted by K8 No comments:

The Olympics are right around the corner. And, I must admit, my household is a-buzz with excitement. B and I regularly spend evening watching the Olympic trials and picking arbitrary favorites. The thing that consistantly shocks me is the age of many of these athletes. Thirteen year olds compete for a place on Olympic teams. There are high-schoolers to college grads.
A few nights ago, we watched a 17-year-old girl compete in the synchronized diving trails. She and her partner came within a tenth of a point of qualifying — falling just short of the dream. Every time she would dive, the camera would pan to her family holding signs, holding their breath, holding each other. When she came up short, her eyes filled with tears and you could see her searching the crowd for the one person who could make it better. Over and over she mouthed the word, "Mom." Afterwards, as NBC was interviewing the winners, the commentator asked what each girl was going to do to celebrate their narrow victory. One of the champions smiled demurely and said, "First, I need to give my mom a hug and a kiss."
I found myself weeping. Both girls had said so much. When you're happy and when you're sad and when you're sick, or excited, or anxious, or overwhelmed ... the person you most notably turn to is your mom. She's the sun that for years childrens' worlds revolve around. She makes things that are great seem better. And, things that are devastating seem manageable.
That's why P&G's commercials for moms are so priceless. So, to all the fabulous moms out there, thanks! A few of my favorite P&G commercials are archived here:
http://www.youtube.com/watch?v=vC9H855rgOY
http://www.youtube.com/watch?v=R4C--zAy-ME&feature=endscreen
http://www.youtube.com/watch?v=yo0ejBHp8UI&feature=related
Posted by K8 No comments:

What no one tells you ... about being pregnant!

I consider myself a fairly educated person. That being said, there are a few things I've learned over the past 4+ months. These are things that I have never readily seen posted on a website, I've never heard amongst my friends who are pregnant and, in many ways I suppose, are taboo in mentioning. It's like the guy who created the, "What happens in Vegas, stays in Vegas" rule also insisted that for future procreation — some things about pregnancy must stay under wraps. But, I'm saying to hell with it. After all, I might later use this blog as a reminder if I ever get baby amnesia and decide I want to try this again.
1. Horror Stories. I think it's fairly common knowledge that having an infant is trying work. However, what I never realized is the amount of infant/birth horror stories that people regale you with while you're sporting a bump. And these little tales don't come with s'mores (i.e. the benefit of campfire horror stories). Thus far I've been told I'll never be able to read a book, take a long shower, sleep in or in general relax again. That labor is so mind-numbingly painful that the horror can't fully be expressed in words. That epidurals sometimes don't work. And, that even when I can sleep, it will likely elude me for fear that my baby will asphxiate, throw themselves out of bed, attempt escape but get stuck between the crib bars or (worst nightmare) cry out without my noticing it. Note to parents out there ... there's no going back on this situation and all these things I'll figure out myself. Please stop with the scare tactic.
2. Body awareness. I think that I'm typically in touch with what's going on in my body. I can tell when I'm catching a cold. I'm smart enough to predict a hangover and its violent side effects. But, I never was as aware of what's going on inside me as I am now. If my boobs grow a centimeter, I notice it. I feel stretching in my stomach. And, during the first trimester, I could tell you down to the minute when I was going to throw up. It's uncanny. I know me too well!
3. Lack of sympathy. My husband might be one of the kindest men alive (and I'm not just saying that because his mom reads this blog). But, he doesn't really understand anything about pregnancy. For instance, I'll say "I'm so uncomfortable." And he'll reply, "Yeah me too ... it's sorta cold in here." No, you fool! Everything goes back to this pregnancy. So when I say I'm uncomfortable it's because my boobs are the size of watermelons and that's making my back hurt. Or, my pregnancy spanx are riding up in an unbecoming way. Get with it!
4. Unnecessary attention. This title shouldn't be misunderstood. I love attention! Thrive on it really. After all, that's basically what a blog is right ... a call for attention. And, when I got pregnant, there was a certain amount of attention I wanted. For instance, I wanted to get the seat on a crowded train. I did not want my local barista at a coffee shop to rub my belly and talk about nursery colors. I'm dying for a t-shirt that says, "Ask Before You Touch" because no one told me that it would be random strangers who wanted to rub my belly like it's some good luck talisman.
5. Look but don't touch cravings. One of the main questions people ask is "Are you having any strange cravings?" I swear I could choke the person who started that pickles and ice cream rumor. But, the answer is always yes. Yes, I crave things. And these are mostly things I'm not allowed to have because I'm pregnant. Like Feta cheese. My friend Amy swears she's getting me a big block of Feta cheese once this pregnancy is over and I can finally gorge myself on it. I would swim in Feta cheese and I dream about it almost once a week. I also crave Bloody Mary's. Sushi. Mussels. And, mostly, Feta cheese!
All this being said, I know what a blessing having a baby is and I'm excited. I just thought — for everyone out there considering pregnancy – that being fully informed is necessary. "What happens in Vegas, stays in Vegas" guy be damned. So, if you're not pregnant — toast your spouse with a Bloody Mary, enjoy some Feta cheese, be blissfully unaware of what's going on inside you and have a happy Thursday!
Posted by K8 No comments:

The Land of Milk & Honey

My problem with putting together an outfit, particularly during the cool weather/layering months, is that I have a very specific image in my head of EXACTLY what I want to wear (whether this has been created or not). Now normally, this works to my disadvantage. However, I am THRILLED to have recently discovered the Land of Milk & Honey — also known as the website milkandhoneyshoes.com. This online boutique was created by two sisters and, while they sell a selection of shoes ... they also allow you to create your own! You can choose the heel height, color, fabric and embellishments! Moreover, it's not too terribly expensive. If I was still a bride, I would be quick to create my dream shoes for nearly every event! But, as I'm not, I'll have to settle for creating fashionable shoes for my sister-in-laws impending nuptials!
Posted by K8 No comments:

The Lady or the Tiger? 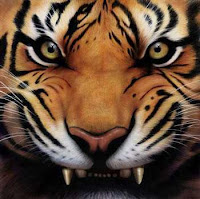 Last night, per my usual Thursday schedule, I was watching an episode of Private Practice. Recently, the show has highly focused on the role of psychiatry in the practice — an area I've always found fascinating. During this most recent episode, Addison was waxing on about a moral dilemma which truly had no positive outcomes. She referenced a story that I honestly haven't thought about since I was an undergraduate and read it in a short story class. The Lady or the Tiger? Are you familiar? Below is a recap.
There once was a mildly barbaric king who discovered his daughter (the princess and the apple of his eye) was having a love affair with a guard (someone truly outside her social station). The king had a unique way of punishing such offenses. He would arrest the prisoner and place them on trial. The trial would take place in an stadium which housed two identical doors. Behind one randomly selected door, he would place a tiger (the most vicious he could find). Behind the second door, he would place a lady (one who was beautiful and one that the king felt would be ideally suited to the prisoner). The prisoner then had the chance to choose his own fate. If he picked the door with the tiger, he would be ripped to shreds. If he picked the door with the lady, he would be married immediately no matter what his personal situation was. Both rooms were sound-proof so there was no way for the prisoner to discover what was behind either door. However, the princess decided she needed to know in order to help seal her loved one's fate. She paid a hearty sum in gold and discovered behind which door the tiger was place and which door the lady was positioned. She also discovered the lady was one she knew and hated due to jealousy. As her beloved guard entered the stadium, the princess motioned for him to choose the door to the right. He did. What the author doesn't tell you is what came out from the door ... the lady or the tiger?
Frank Stockton, the author of the piece, claimed the reader's decision defined their character. So I pose the question to you ... who came out of the room? The lady or the tiger?
Posted by K8 No comments:

The Fabulous Fairytales of a S.I.D., part II

The Fabulous Fairytales of a S.I.D.!

This is my area to share all my loves, fears, general queries, interests and rants. I'm hoping to become famous for ... something ... and when I do, you can all say you knew K8 when! Welcome and Enjoy!

K8
Chicago, IL, United States
I live, love and work as a journalist and journalism instructor in Chicago. This is where I'll be recording all my musings from the Windy City!